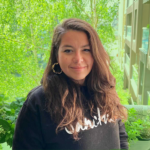 Recently, we had an intense and very open (very Sanctus) discussion around the topic of gender. We were reflecting and talking openly about how gender ‘shows up’ in the workplace. Does it play a role? Does it have an impact on how we behave and communicate – both individually and with each other? How does it make us feel when XY or Z happens? We were asking difficult questions and voluntarily opening up a can of worms.

Half way through I realised that the conversation was unbalanced. It was being led largely by women. We were voicing frustrations that are centuries old but that still persist and that understandably make us mad. Of course they do. It’s ridiculous that outdated narratives still exist. That society still holds such different (and unfair) expectations of men and women. That while stats are moving in the right direction, they’re still weighted heavily in favour of men in almost all areas.

By and large I knew how the women in the room felt, because I was one of them.

Whilst it was important that we were sharing and highlighting these frustrations, what I really wanted to know was what were the men thinking about all of this? How did it make them feel that we as women (their teammates, partners, sisters) felt this way? What did they think they could do to change the status quo and make things different?

To be honest, I couldn’t have agreed more. It highlighted to me something that I’ve noticed when speaking with the men in my life. There are exceptions to the rule of course, but by and large, there’s a real desire to change the narrative. But there’s also a real fear around engaging in the conversation.

There’s a recognition that the societal norms and preconceptions around gender roles are damaging to both women and men.

But the overriding fear around engaging in the conversation persists: a fear of coming across as patronizing, being shamed for being in a position of privilege, or ‘mansplaining’. For saying the wrong thing or not being able to empathize, because “how can you if you’ve not experienced things first hand or been in our shoes?”.

This means that we’re at a standstill. There’s limited real dialogue – and it feels like any dialogue we do have is stilted and cloaked in fear of being attacked or judged. Of saying the wrong thing.

Movements such as ‘Me Too’ have been incredibly important in highlighting sexual abuse and sexual harassment. They’ve brought to the forefront behaviours often linked to toxic masculinity and deeply embedded cultural norms which not only harm women, but which harm men themselves. They’ve moved the needle in terms of getting us talking about behaviours that are simply not acceptable. And forced through well overdue change – be that through explicit policy changes or implicit behavioural changes.

But in the process we’ve also created an ‘us and them’ situation. Two camps. Women vs men. The oppressed and the oppressor.

We’ve all seen the memes and the white-male-priviledge bashing paraphernalia.

I’ve been in conversations, where men have come to the table shocked by events or asking for ways in which they can show support, things that they might be able to do differently, ways in which they can educate themselves. Sometimes I’ve seen these requests be met with disdain and frustration, as if it were more labour to put on women and a view that it’s ‘not our job as women to help you figure that out’.

This feels dangerous. It stops us talking, learning from each other, engaging, debating.

You can’t force or shame people into change.

We want men to be more open, more vulnerable, to share more. But we’re often not encouraging this, especially when we have conversations around gender. By attacking or being resistant to men in this context, we are marginalizing the very things we are asking men to be or show up with.

We are encouraging vulnerability, but arguably we are not making space for it.

We’re backing men into a corner. And we all know what happens when you back an animal into a corner? They curl up into a ball or they lash out and attack back. When we attack or repress something, it will always show up or manifest in a different, usually more dangerous or unhealthy way.

The truth is that changes in the 20th century for women have shifted the landscape for men too.

We have socialized men to be providers but the nature of provision is changing. We’re asking men to give up the narrative that society has allocated to them for centuries yet not making space to have those conversations.

We’re not allowing men to recognize or speak up about how these changes are making them feel.

We are encouraging vulnerability, but arguably we are not making space for it.

Allyship should be about being allies to each other. Creating change together, supporting each other. Embracing difficult conversations together.

Let’s work together on creating safe & brave spaces where neither of us feels like we’re ‘F*cked if we do and f*cked if we don’t’.